The primary mission of the Mid Atlantic Woodturners Association is to put on a woodturning symposium in the Mid Atlantic region in the fall of each year. The Association will also coordinate a wide range of educational opportunities for woodturners and people working in related crafts. The initial symposium was held in Lancaster, PA in September 2016.

Photos from the 2016 Symposium 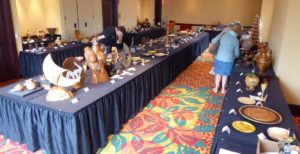 The Mid Atlantic Woodturners Association (MAWA) was created in 2014 resulting from a discussion at a meeting of the AAW Lancaster Area Woodturners Chapter in December, 2013. The discussion was centered on the lack of a regional woodturning symposium in the Mid Atlantic region. That resulted in the formation of a committee to explore the viability of sponsoring a regional symposium. The exploratory committee theorized that they could benefit from going to other AAW Chapters to see if there was interest, and they had an enthusiastic response.  The result was ten clubs in Pennsylvania, Delaware, Maryland and New Jersey joining forces to provide financial backing in the form of seed money and providing members to serve on the board of MAWA.  We would like to thank the supporting chapters, they are:

Mid Atlantic Woodturners Association is a 501c3 charitable and educational organization and is a chapter of the AAW (American Association of Woodturners).